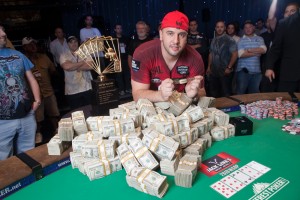 Personal life: Mizrachi was born in Miami, Florida. He is the younger brother of Robert Mizrachi who has numerous WSOP and WPT finishes to his own name. He has a twin brother Eric Mizrachi (also a poker player) and a younger brother, Donnie, who is a professional magician. Mizrachi is fluent in Hebrew, as his father is of Iraqi Jewish origin. Growing up, Mizrachi wanted to become a doctor but dropped out of college to play poker full-time.

Mizrachi is married to Aidiliy, has one son, Paul William (named after his grandfather) and a daughter named Julie Malka (“queen” in Hebrew). He currently lives in Miramar, Florida.[5] He purchased a motor home out of his poker winnings which he used to keep his family near him when he was on the road, but eventually sold it as it was deoreclosed on including a condominium he owned with his brother, Robert.

Michael Mizrachi is a distinguished and successful poker player who in 2006 won CardPlayer Magazine’s Player of the Year Award. Michael Mizrachi got his nickname “The Grinder” for having a solid, consistent style of play; always steadily “grinding” his way through tournament fields. As of 2010, Mizrachi’s live tournament winnings exceed $11,100,000. His 23 cashes at the WSOP account for $2,271,327 of those winnings.

In the 2005 World Series of Poker (WSOP), he tied a record by having seven money finishes in the one year. In the 2008 World Series of Poker he came close to winning his first bracelet when he held the chip lead going into the final table of the $10,000 Pot-Limit Omaha World Championship, but ended up finishing third. Then in 2010, Mizrachi won his first bracelet in the The Poker Player’s Championship, winning $1,559,046, with his older brother Robert Mizrachi finishing 5th in the same event. Mizrachi then proceeded to make the November Nine 2010 with 14,450,000 in chips which commenced on 6 November 2010. Michael Mizrachi won a dramatic hand with A Q against Matthew Jarvis with pockets 9s. The flop came down with two queens giving Mizrachi the lead. But the turn was a 9, giving Jarvis the lead with a full house. An ace on the river gave Mizrachi a better full house to eliminate Jarvis in 8th place. Mizrachi was eliminated by Jonathan Duhamel in fifth place and won $2,332,992.

In January 2005, Mizrachi finished fifth in the World Poker Tour (WPT) World Poker Open at a table also featuring Daniel Negreanu and Scotty Nguyen. The next month he won a first prize of $1,859,909 at the L.A. Poker Classic, defeating a final table including Ted Forrest and Erick Lindgren. He also finished 11th place(out of 452 entrants) in the $25,000 WPT Championship.

In the WPT’s fourth season he finished second to Scotty Nguyen in the Gold Strike World Poker Open. In the next event, one week later, he won the Borgata Winter Open, defeating a final table including John D’Agostino and Erick Lindgren to win $1,173,373 and a 2006 Cadillac Escalade for his second WPT victory.