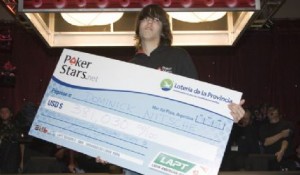 From his native Germany, the young European poker prodigy who stunned Argentina and South America in the LAPT in Mar del Plata in 2009, spoke exclusively to www.hablandodepoker.com about his life two years after that great achievement that was the inflection point in his career.

Dear Dominik, thanks a lot for answer our interview. It´s very important and It´s an honor tu us to make you an interview.

No problem you are welcome.

What do you remember about your first place in Mar del Plata two years ago?

Everything actually. I will  never forget such a big life changing win.

Please tell us something about you reacnh the LAPT playing satellites

Well i had quite a good record playing step 6 before. i already qualified for dortmund multiple times. So one day i was looking at the step  6s and i saw that they were running satellites to the lapt grandfinal. It was right during my holidays so i decided to go after talking to my friend Max Heinzelmann who also won a package. I actually ended up winning 5 seats and i am pretty sure i had the best winrate anyone has ever had in step 6s. i won 5 seats out of 10 tries. Thats a good return even if you do not cash in the main event.

What memories do you have from Argentina? Have you vissited our country on others times? Are you thinking of coming again to Argentina?

I have been to Argentina twice and i have nothing but good memories. The people are very nice even though most of them do not speak english they still try really hard to help you and make you feel welcome. The last time i have been Argentina was for the grandfinal of LAPT season 3 and i will most likely come back for any grandfinal.

Are you studying Spanish? Why?

It actually is one of my goals to learn spanish in the next 2-3years. this is because i spent a lot of time in spanish speaking countries and most of the people do not speak english at all so getting around and can sometimes be come quite difficult and stressful.

Well i just really like traveling. I am still very young and i am at a point in my live where i feel like i should just  do what i want to do. Luckily thanks to poker i have  the possibilities to pretty much travel anywhere i like. I also really enjoy poker. Especially live tournaments  which are by far my strongest game. My goal is to win a lot of more tournaments during the next few years.

Recently, you had an important triumph in Chipre. What can you say about that? How was that expierence there?

I have played in cyprus before and i really enjoyed it. It is a really cool location cause its right on the beach and the games are probably the easiest games i have ever played it in. And the people who come there are very wealthy so they do not mind losing a few thousands to me.

What word of these, is the most used by you: Fold, Raise, Check,or All in?

I usually fold but going all in is more fun.

How many time do you dedicate daily to play poker?

As much as i can. I try to watch atleast one or two strategy videos a week and work on my game. I also try to play atleast 3 days a week.

Are you thinking to play the WSOP?

I am not even 21 yet so i can not play. But i will be staking quite a few players so i hope some of them win a lot of money for me.

What do you play more, and what do you like more: playing cash games in live, tournaments in live or poker on line?

I used to be an online tournament player before i won the Lapt. Now i am both. I mostly play live tourneys but its still very very rare for me to not play online on a Sunday.

What can you say about Poker in Germany?
Poker in Germany is  not very big at all. This has a lot to do with the government being very strict about gambling  and the  law in general.for example  pokerstars is not allowed to advertise and poker is only allowed to be played in casinos in Germany. For that reason there are very few live tourneys and the ones  run by casinos are usually poorly organized and way too small (buy in aswell as field size). Austria on the other hand is doing a fantastic job and thats where all german/swiss poker players go to play. Some of them also go to the czech republic or holland to play in tournaments.  It is quite sad actually.

What are your goals in the World of Poker ?
Trying to win as much money and as many titles as possible obviously. But seriously i do not like setting any short term goals. I still want to win a few bracelets though but who does not

Thanks again for your answers

Thank you. I hope you enjoyed it. 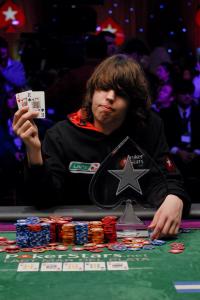