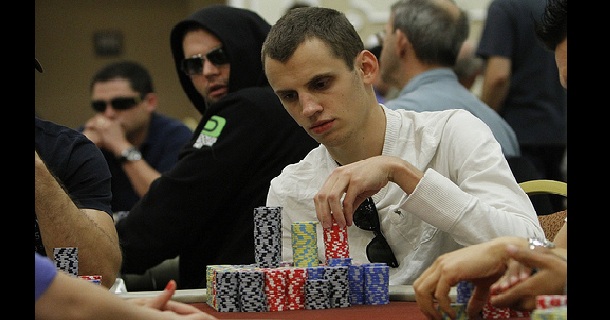 He is a specialist in online poker and has won more than three million dollars in prizes. He has worked in improving his poker when he plays live poker. Everyone knows him as «USCphildo.» On November 5, he`ll fulfill the dream of almost all players in the world of poker: to play the final table of the Main Event WSOP. With nearly a million dollars in prizes garantized, he will start fromfourth place in chips account and is undoubtedly one of the great «candidates» to win the bracelet.

Here, we are presenting you an hablandodepoker exclusive interview with Phil Collins, another November Nine.

Being in the November Nine is a great accomplishment for anyone, but as a professional player, this is the highlight of my career and the culmination of a lot of hard work.  There is still a lot of poker to be played though.
48 hours later that moment, Are you conscious about what you`ve achieved?

Everything has been happening so fast that it was hard to take it all in.  The past few days I’ve been able to relax more and take in the whole experience.  I love that the final table is in November as well, because this moment will last four months.

I could barely sleep during the final few days of the Main Event and the night after my heart was still racing and I couldn’t sleep well at all.  I’ve finally gotten some good sleep the last couple nights.

I played a really big pot with AK against KK all in before the flop on Day 5 that would have left me crippled, but I rivered a straight and shortly afterwards went on to take the chip lead.

Do you think you can get the bracelet y enter in the History?

I think I have a great shot at winning the bracelet and making history.  I’ve been playing the best poker of my life, and if I play my best in November I think I can win. 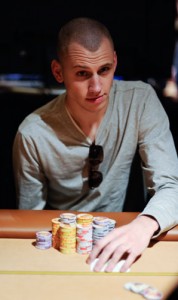 How will you do to live this months until November 5th. And how will prepare to the final table?

I will be playing a lot of the poker tournaments in Europe, including the EPTs in London and San Remo as well as all of WSOPE to keep myself sharp for November.  I’ll probably relax the next couple weeks and take some time off after working all summer before I go to Europe, and I also plan on trying to eat healthy and exercise to get in better physical shape too.

Which tournaments are you thinking to play until November?

I started playing poker in college with friends and eventually found my way to online poker.  I lost money at first but slowly started to win, and after college I decided to pass on law school to play poker professionally.  I played the main event for the fourth time this year.  The past three years I played it but busted early each time, once on Day 2 and twice on Day 1.

How do you think your life will change now that you are a November Nine?

A lot of opportunities will come my way now that I am a November Nine, but I plan on staying the same person.  I’m a laid back guy who loves hanging out with friends and family, so I’ll try not to let this exposure change who I am.  I’ll play a lot more poker and I expect to get a lot of attention when I do, but I’ll just keep being me and enjoying life as it happens.

What was your goal before you started participating in the tournament?
My goal was to play poker without making any mistakes and have no regrets in my decisions after the tournament.  I knew that if I played my best I could make the final table, but I didn’t make that a goal.  I just wanted to play the best poker possible and not worry about anything else.

For those who don´t know you, How would you define yourself as a poker player?

I’m more of an online poker player who learned the game from playing online, but lately I’ve really worked to make myself a better live poker player also.  I’m capable of mixing up how I play a lot, but in general I am an aggressive player who bases a lot of my decisions on math and poker theory.  I also try to stay in the moment and let my instincts tell me what to do in the tough spots.

What do you enjoy most in poker?
I enjoy the competition. I had a younger brother that I did everything with growing up, and we were always competing.  I love playing games and I love to win in everything I do.  Poker lets me compete on a daily basis and enjoy the feel of victory whenever I do well.

The team of hablandodepoker.com wants to thank Collins because of his excellent predisposition and his time he spent answering questions.